Can you find out what is difference between Tata Indica and Tata Aria in the above photo ? Almost same designs.

I  brought TATA Aria in March 2012 from KHT motors, ITPL Road, Bangalore. I did review the XUV500, Innova & Skoda Yati. My first preference and liking was off course XUV500. Didn't like Innova as it has become old outdated model and Scoda yati was expensive for small size capacity. The Yati interior capacity looked smaller than my Ford Fiesta. Well, Aria is my 4th car. My first car was Tata India, then Ford fiesta and also had Opel Corsa.

XUV500
I liked it like all other Indians at the first slight. I would have brought it, but it had like 8 month delivery time with no bookings being accepted. I took a test drive and i was impressed with the detail design from Mahindra Industrial Designers. I know some of the designers as I am also Industrial designer & they are from my same school - IDC, IIT Mumbai. Mahindra designers have given a very detail thought for every thing from door handles, car keys, led lights in headlamp, stopping car on idle, voice activated commands, touch screen navigation, etc... Its a well job by their product managers and engineers and the whole team. Tatas don't even stand close to Mahindra in XUV500 Vs Aria.
The steering of XUV500 is awesome smooth. Mahindra designers have really design for night interiors. They have given a thought on how the interiors would lit up in night. What are the lights that will glow. Really no one designs that in Desi companies. But Mahindra proved it they can.
XUV looks really like SUV. Where as Aria is neither SUV nor MPV. So they call it crossover. Indians are confused on this concept. 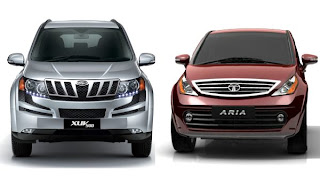 What i didnt like of XUV500 is following -
Our Desi Khatara companies really lack finish and quality.   Indian Cars  offer lower engine warranty than Japanese cars.

Since XUV500 was not available for booking and Aria could be delivered in a week, i went ahead with Tatas. I had taken few test rides of Aria. I found the suspension and engine very good. The interior space is also good. And since i had used India for 5yrs, i thought Tatas wont do such a bad job after 10yrs later.